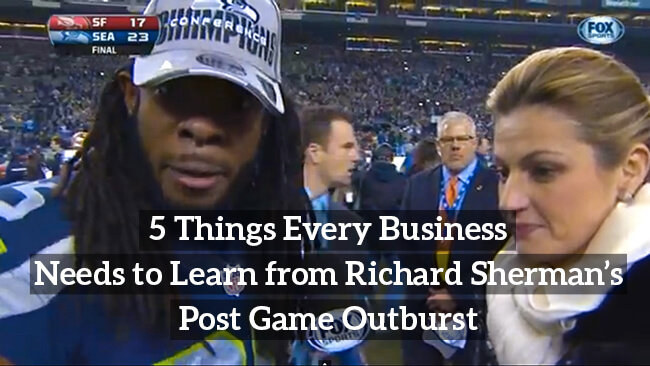 Last night’s NFL game between the Seattle Seahawks and San Francisco 49er’s was an impressive showing of raw athletic talent for both teams. With a game-ending interception that was nothing short of epic for the now NFC Champions, Seattle Seahawks, Richard Sherman taught us all some important lessons.

In case you missed it, the video clip of Sherman’s interview with Erin Andrews is here:

There’s no doubt about it, Richard Sherman’s game-ending interception saved the game for the Seattle Seahawks. He’s a talented athlete and deserves a lot of credit for his contributions to the game. He was undoubtedly on a high and incredibly pumped that he had so much to do with his team going on to the Super Bowl this year. However, here are 5 Lessons Every Business Needs to Learn on the Importance of Keeping your Cool and Staying Humble.

1.  One Mistake Can Forever Change Your Brand Image

You carry your brand image with you wherever you go. You shape it each day by your actions and reactions to the situations you find yourself in. Richard Sherman’s personal brand has forever been altered by this 30 second interview. Twitter and Facebook blew up with people condemning and defending Sherman last night. Whether his personal brand has been shaped for better or for worse is really a matter of perspective, but what’s indisputable is that he did not make himself look like a stand up athlete that many young Americans look to as a role model. For someone who, whether or not he asked for it, is looked to as a role model, his actions certainly sent the wrong message.

2.  Never Bash or Talk Down on Your Competition

Think about it this way, if Sherman had commended his defeated opponents rather than bash them (or specifically Michael Crabtree), the millions of Americans watching the NFC Championship would have thought very highly of Sherman. Whether he was antagonized or not doesn’t matter in the scheme of things, what people will remember is that he took to talking badly about his defeated opponents and making unfriendly gestures to them after they just got beaten in a game that had been one for the record books. That just looks bad, plain and simple.

The only thing worse than a sore loser is a sore winner. Throwing salt in the wound, adding insult to injury. Whatever you want to call it, Richard Sherman did more to damage his reputation and that of his team’s in a 30 second interview than I’ve ever seen on live national television.

His actions had a polarizing effect on the millions of viewers in America. All of the major Social Media outlets exploded last night after Sherman’s interview and the ultimate effect is that many people who may have been undecided on who to root for in the Super Bowl will now be rooting for the Denver Broncos because this one interview. 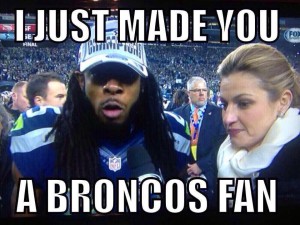 3.  Stay Humble No Matter What

In life and in business, everyone has ups & downs, highs & lows. In the world of business, one day you can be on the top and the next you can suffer a huge blow that sets you back to square one. It’s the people that remain humble through their successes that build the best relationships with others and are much more likely to have a line of people willing to help them when they need it. In being humble, you create good will and build a powerful reputation for yourself and your brand.

Making statements that you’re the best and talking down at specific competitors will do nothing to help your cause. Your competitor will certainly have it out for you, and they’ll be that much more motivated to crush you relentlessly at the next opportunity. Any parties that had previously remained neutral will have all the more reason to side with your competition sheerly because of your inconsiderate remarks.

Sure, everyone is talking about Sherman and the Seattle Seahawks now. This will also most likely make for one of the most watched Super Bowls in recent years, but one needs to weigh all the pros and cons before you decide if any press is good press. It’s all about the short term gain vs long term effects.

Richard Sherman’s remarks aren’t going to make me hate the Seattle Seahawks by any means, but does this permanently shape my perception of him? Definitely. Does it give me a reason to root for the Broncos in the Super Bowl when I had otherwise cared less? Oh yeah.

5.  There’s No Excuse for Being an Asshole

I totally get where Richard Sherman was coming from. I’ve been there. In the heat of the moment after a huge win, it’s easy to lose sight of your principles and make rash decisions, gloat about your success, and say things you normally wouldn’t, especially if you’re provoked. But that doesn’t justify being an asshole. Ever. The actions of one person within an organization can significantly effect a brand’s image and forever alter public perceptions.

That’s the difference between the people who truly understand how to effectively interact with people and make friends, not enemies in life. If you’re able to turn your competition into friends rather than enemies, you’re positioning yourself for long term success.

How do you treat those who you beat in business? Do you rub it in their face, or extend a hand of friendship? Do you look to build a long term relationship or try and make yourself feel better in the short term? Be humble, stay humble, and make friends not enemies.

The real question is, does all this really even matter?