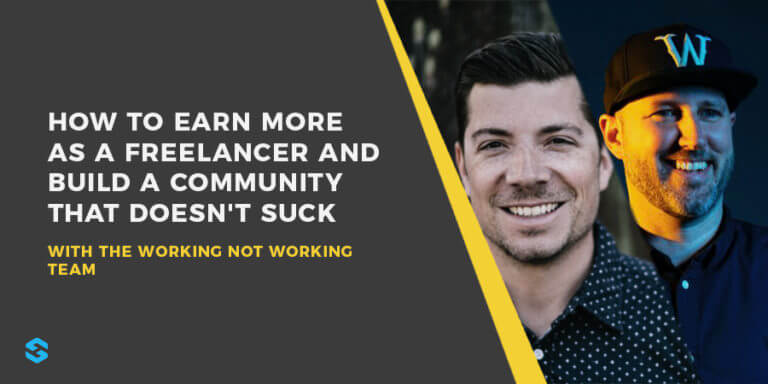 In today’s episode, we’re talking to the founders of Working Not Working—Justin Gignac and Adam Tompkins.

We’re also hearing from their kick-ass Head of Growth and a good friend of mine, Emily Slade in this episode. Now, we’ve had a few recent episodes of the show talking with freelancers and consultants who’ve had experience working on the marketplace sites like Fiverr and Upwork.

Today’s guests run a company that’s pretty much the opposite of these other freelance marketplace sites. Working Not Working is a self-described community of more than 30,000 highly curated freelancers from around the world – people who’ve won awards for their work – and companies like Google, Apple, Facebook actively source talent from their community.

"When you're first starting out, the most important thing is to be prepared." @damtompkins
Click To Tweet

The way it works is not based on collecting commissions from every project that’s booked—and the Working Not Working team doesn’t even put themselves in the middle of the transactions.

They’ve built a community of the best, most experienced, talented, motivated freelancers and because that community is so high quality, they’re able to charge the over 2,000 brands on their platform—a flat subscription fee to get access to their pool of creatives. On top of that, it’s free for creatives to be on the platform and you can apply to join right here.

"If you're not solving real problems, then you're just adding more shit to the world." @justingignac
Click To Tweet

A Column of Fire (The Kingsbridge Novels) by Ken Follett

The War of Art: Break Through the Blocks and Win Your Inner Creative Battles by Steven Pressfield

Start Something That Matters by Blake Mycoskie

Connect with My Guests:

3 replies to “#37: How to Earn More as a Freelancer (and Build a Community That Doesn’t Suck) with the Working Not Working Team”