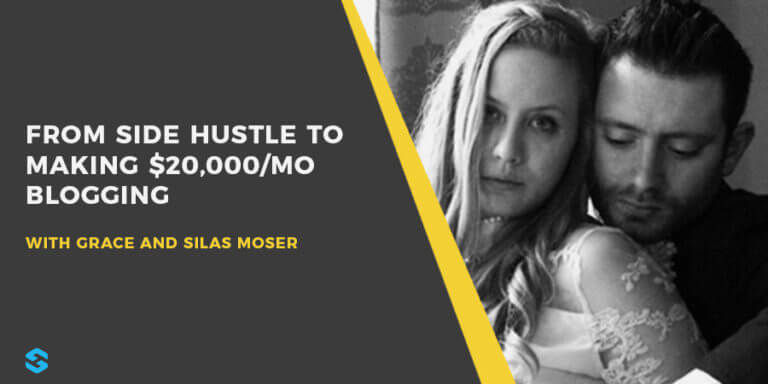 In today’s episode, we’re talking to Grace and Silas Moser, the husband and wife duo behind the blog and massive social following, Chasing Foxes.

Grace and Silas started their blog as a side project just a year and a half ago while Grace was between work and Silas was working a demanding corporate job and they got the inspiration for starting a blog from a few podcasts they’d been listening to about building an online business.

Pretty much instantly, Grace invested a ton of her time and effort into figuring out Pinterest as a traffic source back to their blog and in just a few months they were bringing in hundreds of thousands of readers.

"Study people who are good at whatever you're doing, don't re-invent the wheel." @Chasefoxes
Click To Tweet

They began implementing affiliate links across their posts, signing up for an ad network, and really doubling down on what was working with Pinterest – something as you’ll hear, Grace has turned into an exact science.

So just a few short months after this explosive start to their blog, Grace and Silas were already earning several thousands of dollars… and it’s only gone up since then. Silas quickly left his day job, they moved to a beach town in Mexico and have been traveling the world for the past year – now earning nearly $20,000/mo from their blog.

[02:33] What book Grace and Silas have read recently.
[03:35] Some of the countries they’ve been to over the course of this year.
[04:09] What Chasing Foxes is all about.
[06:27] The average amount of traffic they drive from Pinterest.
[06:53] How long it took them to break one million in traffic.
07:13 Things they did that helped drive that traffic from Pinterest.
[10:14] About the most recent income report and how revenue is generated at Chasing Foxes.
[13:33] How they leverage group words to increase their reach on Pinterest.
[15:53] Their upcoming online course on blogging.
[06:53] Building and monetizing an email list with their blog.
[19:35] Their answers to my frequently asked questions.

Murder on the Orient Express (Poirot) By Agatha Christie