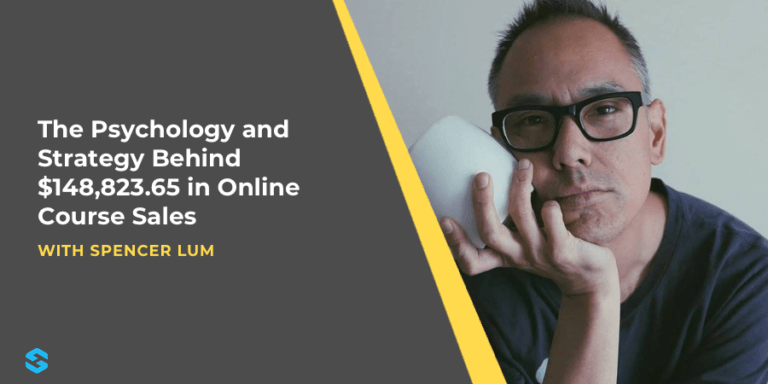 In today’s episode, we’re talking to Spencer Lum, one half of the team behind Extra Bold, where he and his wife Katya teach small business owners how to write more effective copy and become stronger salespeople.

The Psychology and Strategy Behind $148,823.65 in Online Course Sales with @SpencerLum of Extra Bold
Click To Tweet

But, at one point in his life, Spencer himself didn’t even know what he wanted to do. Having studied Philosophy at UCLA, he took a cue from his parents and decided to get his law degree, despite his lack of interest in actually practicing as a lawyer.

"What I try to do is embed all the beliefs that make people believe that everyone else's product is not for them and your product is for them." @SpencerLum
Click To Tweet

This led him down the path to becoming everything from a web developer to wedding photographer, creative director, writer and speaker. Spencer did, however, eventually find his thing.

He built a sizable business in photography and eventually started creating content and building a reputation for himself as an authority that taught other photographers how to stand out from the crowd.

"I write daily and that's probably the best investment I've made in my business." @SpencerLum
Click To Tweet

One thing led to another, and eventually, Spencer found himself chatting with a friend who teaches Psychology at Stanford University – about how people make buying decisions based on how badly they want something and that desire is something rooted in a deep, biological level.

After a deep dive into what it takes to ethically engineer desire & putting it into practice within his own business, Spencer and his wife have generated over $148,000 in sales of their products.