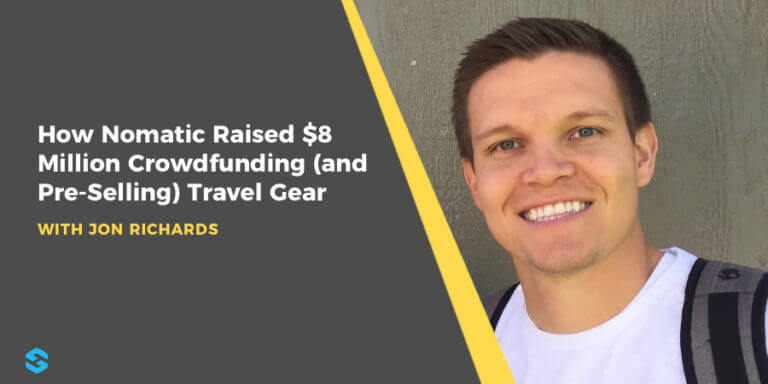 In today’s episode, we’re chatting with Jon Richards, the co-founder of NOMATIC, a travel gear company he co-founded with his cousin Jacob back in 2014 that now sells bags, backpacks, notebooks, wallets, watches and more—all designed for active people that are always on the go.

When Jon and Jacob first started Nomatic, they were both working time-consuming full-time jobs. Jon for an HR software startup, and Jacob for his family’s consumer goods company.

It was while they were sitting together, chatting with their wives at a Utah Jazz basketball game in their home of Salt Lake City, that the two decided they wanted to test out whether or not they could launch their own business and make a run at becoming entrepreneurs.

They knew right off the bat that they wanted to make a product—and had seen several brand new companies take off with the relatively new crowdfunding and this was particularly appealing as you could pre-sell a product without first going through all the costly investment of actually manufacturing large quantities.

"You have to be willing to work hard if you want to become an entrepreneur." @Nomaticgear
Click To Tweet

It wasn’t long after that fateful evening at the game that the two settled on the decision to make a few prototypes for a wallet they could launch on Kickstarter. Little did they know, that first crowdfunding campaign would generate more than $170,000 in sales. And each subsequent campaign they launched only grew from there.

The 4 Hour Workweek by Tim Ferriss