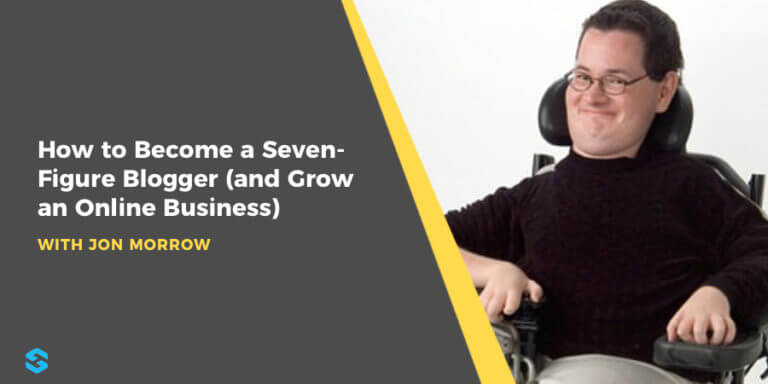 In today’s episode, we’re talking to Jon Morrow, the legendary blogger behind the massively popular site SmartBlogger, that reaches an audience of more than 100,000 email subscribers and generates well over $100,000 in monthly revenue.

Jon has one of the most incredible personal stories I’ve ever come across. Born with a form of muscular dystrophy called Spinal Muscular Atrophy, Jon’s spent the vast majority of his adult life almost completely paralyzed, save for being able to move his eyes and lips—which enables him to write through speech recognition technology.

"One of the best investments in my business has been building a real team." @jonmorrow
Click To Tweet

Now, despite having a very different childhood than most, Jon was never one to shy away from hard work and by the time he was 20, Jon had already built and sold his first website. He landed a job as an editor at CopyBlogger, one of the world’s most popular blogs, and he eventually launched his own blog that’d go on to become SmartBlogger.

"I've at times sacrificed my health and social life in order to grow my business." @jonmorrow
Click To Tweet

Today, as Jon puts it, he’s become a millionaire all from his wheelchair. He’s written articles that have reached 5 million readers, he regularly gets hundreds of thousands of shares on his content, and he’s launched several premium online courses that power the core of his online business.

3 replies to “#86: Jon Morrow on How to Become a Seven-Figure Blogger (and Grow an Online Business)”