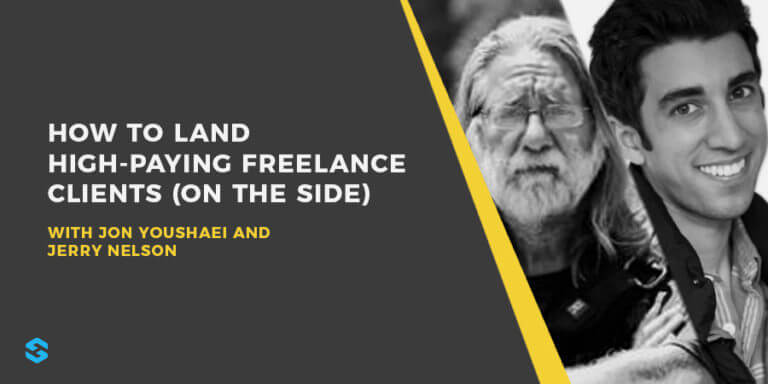 In today’s episode, we’re talking to two freelancers who’ve mastered the art of getting high-paying freelance clients—and they’ve built massive personal brands for themselves in the process.

First up, Jon Youshaei, who actually still works a full-time job as the Head of Creator Product Marketing at YouTube. Jon’s a writer for sites like Time, Forbes, and Inc Magazine, the latter of which ranked him as one of the top 7 marketers of the year.

"I'm a believer in doing. Creating consistently is the way to grow your side project." @youshaei
Click To Tweet

Jon’s written countless stories that have gone insanely viral—we’re talking 1 million plus views, and he runs his own blog called EveryVowel with more than 400,000 monthly readers where he shares a weekly cartoon that pokes fun at workplace culture.

Jon’s been freelancing on the side of his day job for a while now, and his primary source of freelance income actually comes from Fiverr where he books consultation calls and takes on writing projects with companies that want their products to go viral.

Next up in this episode is my conversation with Jerry Nelson, a freelancer with a fascinating life story—that no joke, reminds me a lot of the journey Tom Hanks character went on in the movie Forrest Gump.

Unlike Forrest, Jerry’s built a massive freelance business for himself over the past couple of decades. He’s done work for companies like National Geographic, CNN, Getty Images and more, and everything really got started for him with the photo and written documentation of a walk he did from Washington DC to Humbolt County, California.

His story is seriously incredible.

Big shoutout to the team over at Fiverr Pro for connecting me with Jon & Jerry and making this happen!

Connect with My Guests:

Jon on LinkedIn, Twitter, and his special offer for SHP listeners right here on Fiverr

9 replies to “#36: How to Land High-Paying Freelance Clients (on the Side) with Jon Youshaei & Jerry Nelson”