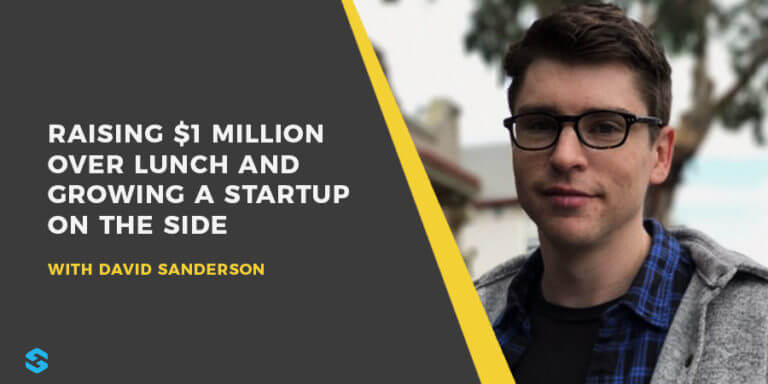 In today’s episode, we’re talking to David Sanderson, the founder of Reelgood, an app that allows you to connect all of your different streaming platforms (like Netflix, Hulu, HBO, Showtime) into one single app on your computer (and soon, your mobile devices) so that you can stream everything in just one place.

Originally from Canada, David has always been an entrepreneur at heart—from the traditional lemonade stand to tinkering with radios and building little projects in his free time.

David eventually landed a job at Facebook here in Silicon Valley where he led one of the company’s biggest initiatives to launch Facebook’s self-serve ad platform, a feature that now brings in a substantial portion of their revenue.

All the while, David was slowly making progress with his idea for Reelgood on the side of his work with Facebook, even hiring a sizable team of employees to get more traction. Eventually after landing his first $1 Million investment over lunch, David made the leap to working full-time on Reelgood, but his memories of growing a startup on the side of his day job will stick with him forever.

[04:32] We find out what book David is reading at the moment.
[06:33] How David moved from Canada to the Bay Area.
[09:27] He talks about his former side hustles, projects, and businesses.
[12:15] We find out what inspired the idea of Reelgood.
[13:53] We hear how he led one of Facebook’s biggest initiatives – launching its self-serve ad platform.
[16:24] We hear what strategies he learned while working at Facebook.
[17:47] Why he can’t hire his friends and former workmates at Facebook.
[19:18] Why he decided to leave a comfortable, secure job at Facebook to take his side hustle, Reelgood, full-time.
[22:48] What made an investor sign over a check for one million dollars to him.
[24:25] The differences between his first and second investors.
[25:42] He shares his future plans for his company, Reelgood.
[27:51] Why he hates the PR companies he’s worked with in the past.
[spp-timestamp time=”28:38″] How he and his team got press features in Tech Crunch, Mashable, and The Next Web.
[31:17] His best piece of advice on how to start working on a side project.
[32:51] How he made the time to work on Reelgood while working full-time at Facebook.
[33:50] His fair share of failures on validating some of his ideas, tactics, and strategies.
[35:17] Lastly, he talks about the best investment he’s made in growing his business.