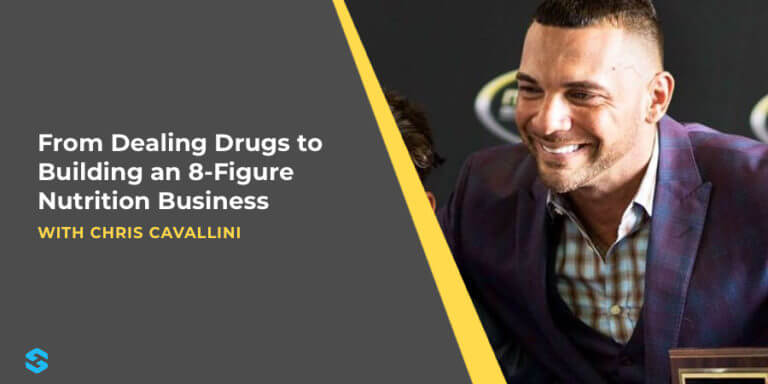 In today’s episode, we’re talking to Chris Cavallini, the entrepreneur behind the 8-figure company, Nutrition Solutions, the meal prep company that serves over 30,000 customers including NFL players like Rob Gronkowski and dozens of other professional athletes.

Originally from Boston Massachusetts, Chris had a bit of a rough childhood as he was growing up and started getting into trouble by his early teenage years. Before his 18th birthday, he was arrested seventeen times and by the time he was a senior in high school, he was given an ultimatum by the state of Massachusetts to either serve seven months in jail or join the military—and he chose the Navy.

"In business and in life, you have to care deeply about what you do." Chris Cavallini @nutrition_sol
Click To Tweet

This launched Chris down the path of building character, learning discipline, structure, and developing high standards as an elite Navy deep sea diver. However, it was after he left the Navy and returned home that he’d get into some of the darkest times of his life he took a job working at a strip club, got burnt out and began dealing drugs & selling anabolic steroids for the next 6 years.

It was only after friends started getting sent to prison that he got into personal development, attended seminars, watched Tony Robbins videos, and started craving a deeper fulfillment and that right there is what eventually led to Chris testing out a legitimate meal prep business and launched Nutrition Solutions.

[02:52] Where Chris is originally from.
07:10 What his time at the military was like.
[10:06] How he pulled himself out of dealing drugs.
[13:28] How investing in personal development helped turn his life around.
[16:32] When he started working on nutrition solutions.
[19:02] His first big high-profile customer.
[22:01] His most successful marketing strategy.
27:49 The best investment he’s made in order to grow his business.

1 reply to “#107: From Dealing Drugs to Building an 8-Figure Nutrition Business with Chris Cavallini”